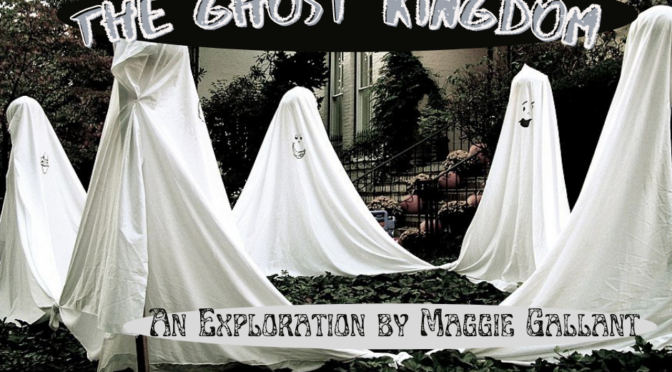 It’s the week of Halloween, the time of year when we love to scare ourselves. Who hasn’t had a run-in with a ghost this time of year? Or even been one?

People in adoption live with ghosts year ’round. Not the kind that cause physical harm, but those that affect our psyches. These ghosts can be so omnipresent — and therefore powerful — that we can’t afford to even acknowledge them.

Betty Jean Lifton, PhD, a renowned psychologist and adoptee, called this the Ghost Kingdom of adoption. Her idea has resurged since the hit NBC series This Is Us featured it on Episode 513 as the backdrop to exploring the inner life and identity of adoptee Randall Pearson.

I’m pleased to present a guest post that further explores the Ghost Kingdom, by playwright and adoptee Maggie Gallant. Maggie’s new play, which delves into the Ghost Kingdom, is called Betwixt & Between, and it premiers in early November at the Adoption Knowledge Affiliates (AKA) 2021 Conference. You can witness the premier! Tickets to Maggie’s event can be found here. I’ve got mine, and I hope to “see” you there.

More details on Maggie after this fascinating essay about her Ghost Kingdom — and the Ghost Kingdoms of her parents.

“The ghosts who trail everyone in the adoption triad make up a shadow cast of characters. These ghosts are too dangerous to be allowed into consciousness. Instead they are dissociated, consigned to a spectral place I call the Ghost Kingdom. It is not located on a map, but in the geography of the mind.”

I knew about the Ghost Kingdom long before I discovered there was a name for it.

I was 11 years old when I found the envelope of papers in my mum’s desk drawer. Learning that I was adopted wasn’t a huge surprise. I’d never really had a strong sense of belonging or closeness with my parents, or my brother. But discovering that my birth father was French was thrilling, and it explained my difference.

Growing up in a small English village and always feeling like the odd one out made it easy to escape into fantasies about my fabulous French Papa. The Church of England Children’s Society adoption papers described him as an “intelligent and ambitious man whose interests are reading and swimming.” I couldn’t wait for our first meeting. For that moment of instant recognition between father and daughter.

I repeatedly played out the same fantasy and even wrote a school essay titled My Perfect Day. My French Papa and I would meet at the Eiffel Tower, which of course he owned. We would have the same eyes and the right ear that stuck out. That essay, and the story that unfolded over the next 10 years, became the basis for my first solo show, Hot Dogs at the Eiffel Tower.

Adoption awareness pioneer and advocate Betty Jean Lifton created a term for this fantasy world: the Ghost Kingdom. For the adoptee, she says, the ghost may be their sibling rival — the biological child his or her parents might have had. There’s also the ghost of the child he or she might have been if they had remained with the birth mother. This, in particular, was always the dark side of my ghost kingdom, an alternate me who was everything I wasn’t. I’m very fortunate to have a copy of my original birth certificate. It gives the name that my birth mother chose for me: Donna. And when I felt insecure or alone I could count on Donna, my what-if persona, to show up and remind me how confident, successful, happy, loving and loved she was.

Did My Parents Have Ghost Kingdoms of Their Own?

I’m ashamed to say that I never considered how my parents might have been living with their own ghosts. Lifton explains how adoptive parents can be shadowed by the ghost of the perfect child they might have had. And by the birth parents whose child they are raising.

I was never close to my mum and dad. I resented them for being so much older than my friends’ parents. I blamed our lack of closeness on generational differences. Why had they waited 14 years after marriage to have a child? I was so blinded by my thinking that I was in my 40s before I considered another explanation. How much pain and grief had they experienced being unable to conceive, but still longing to be parents? And then trusting the adoption agency advice to provide me with a good home, teach me good Christian values, and never mention being adopted. Doing that, they were told, would make me a happy child who never needed to know more.

Neither side bonded in the way we would have hoped. What was that like for them? Did they seek comfort in the ghost of that perfect child? The one who would look just like them, share their mannerisms, reflect the best of the two of them?

I wish I could say that I instinctively understood this, but it took me a long time to see my birth mother as anything other than a person to blame. In what was a fairly common practice in the 1960s, the adoption agency created a false narrative. The letter to my parents stated that “the baby’s father wanted to marry the mother, but she decided against it.”

I read that when I was 11 and never questioned it. I was 48 when I discovered the difficult and very different truth. I resented this woman for not giving French Papa a chance to be my father, and our prickly reunion when I was 21 did nothing to bring us closer. She couldn’t, or wouldn’t, tell me about my father and in the end I felt justified in killing contact with her.

But like most unmarried women in 1965 she hadn’t stood a chance at keeping her baby. And the emotional damage had already been done. She, too, had been adopted, and was separated from a sister that she never knew. To then give up her own baby must have created such pain that shutting down was her safest coping mechanism. I can only wonder about her ghosts. Who did she hope her ‘Donna’ would turn out to be? Did I even come close? I will always regret the conversations we never had.

Bringing Ghosts Into the Light

When I read Betty Jean Lifton’s description of the Ghost Kingdom I experienced an incredible moment of recognition and understanding. I wasn’t alone. It wasn’t my fault. And yet the euphoria was, and still is, tinged with sadness that I didn’t discover this sooner. How different my family relationships might have been. But my mum and dad, my birth mother, and my birth father have all passed on. I still work to forgive myself for all the things I did and didn’t do.

Bringing my ghosts into the light has been a painful process. I’ve had to accept that we can revisit the past but we can’t change it. Writing and sharing my story on stage has helped, but I can still be tripped by a throw-away comment, or find the tiniest hint of criticism in even the kindest review.

But just as the Ghost Kingdom can only thrive in secrecy, so can openness lead to new connections. Those that I’ve made with other people in the adoption community are more precious, intense, and affirming than I thought possible. I hope that my generation of adoptees in closed adoptions, especially those of the ‘baby scoop’ era, are the last to feel any sense of shame or secrecy. But this cannot happen until every adopted person is able to access their original birth certificates. And even then, it won’t eradicate the what-ifs and the questions, the imagined other lives, and natural curiosity. Those things are an essential part of human nature, and of the adoption experience.

And if we bring them into the light where we can all see them, then they aren’t ghosts anymore.

British-born playwright and performer Maggie Gallant writes for the stage on issues of identity, belonging, and family dynamics. She created the critically acclaimed play Hot Dogs at the Eiffel Tower which chronicles her life-long search for her birth father. Gallant’s latest play, Betwixt & Between, explores the complexities of the adoption Ghost Kingdom.

The play premieres online on Friday, November 5, at 7:30pm ET | 4:30p PT. It is part of the featured content at the Adoption Knowledge Affiliates (AKA) 2021 Conference.

Get your tickets to the virtual reading . A link to the recording will be available to registrants after the event.