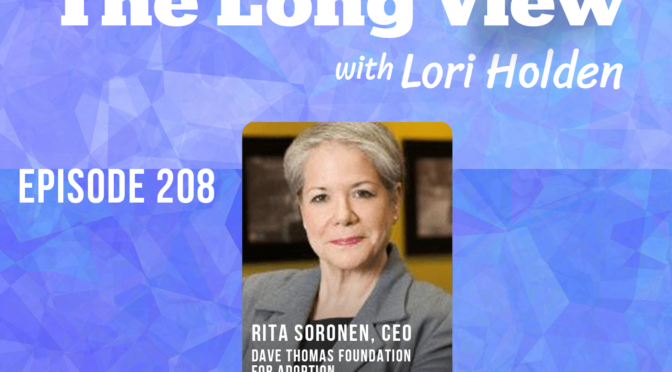 — Rita Soronen,
President & CEO of the Dave Thomas Foundation for Adoption,
in Ep 208 of Adoption: The Long View —

Have you ever eaten a meal at Wendy’s? Perused the list of top Adoption Friendly Workplaces? Felt an ache in your heart about children who are in foster care, growing up without a permanent family taking care of them, loving them, teaching them all the things people need to know to be independent and prosper?

If so, you may already be acquainted with this episode’s guest, Rita Soronen, who is President and CEO of the Dave Thomas Foundation for Adoption (DTFA).

Dave Thomas founded Wendy’s restaurant chain in 1969. He was adopted as a very young child and became an advocate for foster children in his adulthood, founding the Dave Thomas Foundation for Adoption in 1992, with the mission of finding homes for children who need them.

Each year, 20,000 teenagers age out of foster care, leaving them at higher risk of homelessness, unemployment, and other negative outcomes. DTFA and Wendy’s Wonderful Kids programs are working to reduce that figure.

It is my pleasure to present Rita Soronen in the November episode of Adoption: The Long View, as this is National Adoption Awareness Month. This designation was originally established with the focus on finding permanent homes for children who needed them, but has grown to also cover domestic infant adoption (not without controversy; less awareness is necessary for newborns needing a home as opposed to older children needing a home).

Listen in as Rita reveals:

No child is in foster care because they’ve done something wrong. They’re there through no fault of their own.

— Rita Soronen, CEO and President of the
Dave Thomas Foundation for Adoption,
in Ep 208 of Adoption: The Long View —

Rita Soronen is President and CEO of the Dave Thomas Foundation for Adoption. She is a founding board member and past vice president of the Congressional Coalition on Adoption Institute and is a current member of its advisory board. She also serves as a member of Barco’s Nightingales Foundation’s advisory board and the National Court Appointed Special Advocate/Guardian ad Litem (CASA/GAL) Association for Children’s board of trustees.

Rita is a recipient of numerous awards, including the Angels in Adoption Award, and the National CASA Association Kappa Alpha Theta Program Director of the Year Award. She is a fellow of the Jefferson Fellowship for Executive Leadership; was awarded an honorary Doctorate of Community Leadership from Franklin University; was named a YWCA Woman of Achievement; and was honored with Smart Business Network’s Smart 50 Program Award for Impact, Giving Back to the Community. Rita resides in Columbus, Ohio.