Sometimes you can go back.

But why, you might ask, why would I want to go back to this: 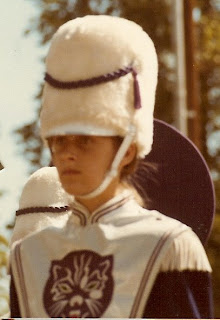 This photo (no shocker that it was my entry into Edenland’s Dork Olympics many years ago) was taken one autumn during my high school years. I was a proud member of the marching band, we of the ridiculously hot and unfashionable uniforms and the furry hats designed by Coneheads from France. I played the piccolo — it was the lightest instrument of all and you could always hear my part. I was a squad captain and a serial dater* of members of the drum section. Band was my social group. Yes, we were super-nerds, but we were super-nerds together.

My high school is now in its 50th year, and to celebrate, the current marching band director invited all band alumnae to play last week at the Homecoming game under the Friday night lights.

It was cold, drizzly and miserable — a 40 degree drop from the temperatures the day before. I almost didn’t go. Would I know anyone? Would I recognize anyone? Could I still play? Would the whole thing bore my children?

Luckily, come Friday afternoon my friend DeDe, a flautist, made me hold up my earlier  invitation that we go together. I no longer had a stylin’ hat but I still had my piccolo, my mad Star Spangled Anthem skillz, and a love of wearing the purple. Roger and Reed enjoyed the football game and Tessa enjoyed hanging out with the high school teenagers who were warm and welcoming to we old-timers.

Our friend and brass player Ralph joined for this photo, taken by Tessa. 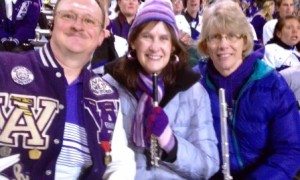 Longtime readers know I like to time travel. And as I played the school fight song and closed my eyes, I was in two places at once. I was a fresh-faced 17 year-old who hadn’t dealt with any real tribulation (but who considered an ill-placed zit a MAJOR TRAGEDY!) and who was chomping at the bit for independence, yet fearing it. I was also a middle-aged mom breathing in the cold night air and giving thanks for the paths my life had taken.

I looked at the current generation of marching band members — fresh-faced kids — and could see that they were in for many of the experiences that people in my class had faced since we were last high-stepping on the field. Some would find satisfying careers and some would be stunted job-wise. Some would age well and others not so much. Some would face loss, cancer, widdowhood, tragedy, sadness, and death. Some would revel in children, grandchildren, accomplishments and triumph. Their paths would be a curious combination of luck and effort, of making things happen and of letting things happen.

Just like mine has been. And continues to be.

* By “dater” I  mean that I had a crush on one drummer or another, mostly unrequited.