The Today Show aired a segment this week that highlighted STFU, Parents, a site run by Blair Koenig. The blog, born in March of 2009 (from its About page),

…is a submission-based “public service” blog that mocks parent overshare on social networking sites…The site serves as a guide for parents on what NOT to post about their kids as well as a forum for non-parents to vent about their TMI-related frustrations…The blog covers a range of topics, from placenta smoothies to lessons in potty training to bouts with puberty, and never aims to be hateful or mean-spirited.

Last week, Blair shed her anonymity by appearing on The Ricki Lake Show. Coincidentally, she also just announced that her blog-to-book is coming out in April (Perigee Press).

I saw the teaser for the interview on my way out the door and it hooked me, even though the blogger and her blog had barely been on my radar. I try not to have anything to do with mocking for the simple reason that I don’t like being mocked (who does? I suppose some think any attention is good attention). When I returned to my computer I looked up the clip and found it sociologically fascinating. By that I mean I wonder what sociologists in 2052 or 2082 will conclude about our collective psyches at this point in the evolution of the human community.

The fodder for Blair’s site comes only from social media sites, not blogs. In fact, Blair said on The Ricki Lake Show that she recommends that people instead start a blog because it’s doesn’t hold an audience captive the way Facebook does (Facebook holds you captive?).

I poked around the site and yes, I found evidence of poop posts, mommyjacking (a commenter hijacks a thread out of eagerness to talk about her own child), sanctimommy (a holier-than-thou insertion to a Facebook discussion), and, as billed, things you can do with your placenta when your baby is done using it.

Finding the line
The most thought-provoking line comes at the end: “There’s a difference between sharing and oversharing.”

How do we draw the line between the two?

Carolyn Savage, author of Inconcievable and contributor for The Today Show website, shares 7 tips on doing so. Basically, if sharing has to do with nether regions or bodily functions, DON’T. And you should click over to read what she says about posting news of your children because, well, she had to navigate a verrrrrrry tricky story in writing her book and respecting the boundaries of the people involved.

My own decision-making process is to run possibly oversharing posts through series of sieves, attributed to Zen Buddhists, Quakers, and Rotarians:

Just the act of pouring one’s thoughts through a sieve accomplishes what Blair Koenig suggests toward the end of the interview. To paraphrase, she preaches to post with awareness because it’s not just about you. Your words affect not only the children you’re writing about but also the people whose streams you show up in.

I bet that just one moment of reflection and self-awareness would reduce STFU’s fodder by at least half (and spellchecker/grammar checker would clean up half again). Much of the time when people post about their kids, they are doing it simply to feed their own egos — myself included. There’s nothing wrong with that unless the feeding comes at the kid’s expense. THIS is what requires the test of the sieves, the awareness, the mindfulness.

So why do I feel a little bit dirty after perusing STFU, Parents?
Is it mean-spirited? Only 12% of Today‘s audience say yes.  On one hand, I like to gawk, even though I don’t go out of my way to find train wrecks to gawk at. On the other hand, I would be mortified to recognize my own words on this site. I looked through my Facebook and Twitter streams to see if I could envision any of my kid-oriented proclamations on STFU. Could these get me ridiculed for oversharing?

My child & I ran into my child’s teacher tonight. At the liquor store. We grabbed our bottles of wine, smiled at each other and nodded. 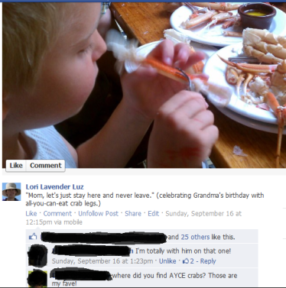 OK, so neither improves on silence. And neither were necessary (would anything on Facebook be considered necessary?). But, may I point out that both are free of grammar and spelling errors?

In spite of the site’s About claim, it does feel mean-spirited — toward people who, through ignorance or their own insecurities, have opened themselves up to it. The people on Blair Koenig’s site don’t know they’re being skewered (an assumption on my part). Even though the site anonymizes its subjects, the ridiculing happens without their permission or knowledge. Maybe the latter is a merciful thing.

But who am I to judge, really? I have not always been pure of heart on social media. I can’t say with 100% confidence that I didn’t get a chuckle at the possible expense of my children with these two examples. Maybe my sins aren’t as egregious as those of the poop moms, but that’s just a question of degree.

Have you been guilty of oversharenting? Where is your line between sharing and over sharing?

I am deliberately not posting links because I do not want to appear to endorse the practices of STFU, Parents. Nor do I condemn them. I think the study of how we relate with each other online is fascinating, though. If you want to know more about this blog or the bloggers appearances, a little googling is all you’ll need.

33 thoughts on “Oversharenting: Are you guilty of it on Facebook?”