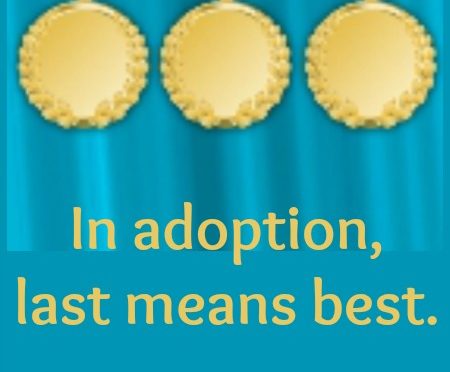 I had long struggled with the idea of adoption as a second choice — pregnancy being the default setting and thus, first choice. After all, I had ended up in exactly the right place. I wouldn’t want my family to be any different than who we are. But how to explain this to my children, who are likely to ask questions in the coming years?

One day I came across Melissa at Stirrup Queens, who addresses the term “second” as a chronological term rather than an ordinal term. 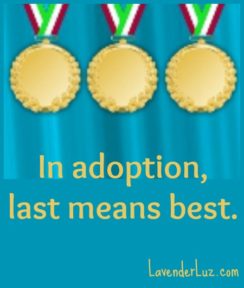 Was Roger my first choice as a husband? Well, considering I kissed a few frogs before I even met him, Roger wasn’t chronologically my first choice. I wonder how my life would be now if I’d ended up with Alan, the boy who helped me collect worms one day when we were 8. Or Dave, the disk jockey turned radio-mogul, or Bill-the-farmer or Carl-the-slacker or Ike-the-commitment-phobe.

Roger was definitely my best choice. But I meandered to get to him. The meandering is what made me worthy of him and appreciative of him.

It’s oddly coincidental. Tessa developed her first crush this week during Vacation Bible School. She is smitten with a boy double her age, a 6th grader named Cory. She dressed for him, had me braid her hair for him, talked incessantly about him, and dreamed of him. She claims she’ll marry him.

Not very likely. Cory may be her first, but what matters is the last. That’s the keeper.

Just like Tessa, and just like Reed. My meandering to them is what makes me worthy of them. The process of our family forming was absolutely the best choice, even if we started out not knowing that.