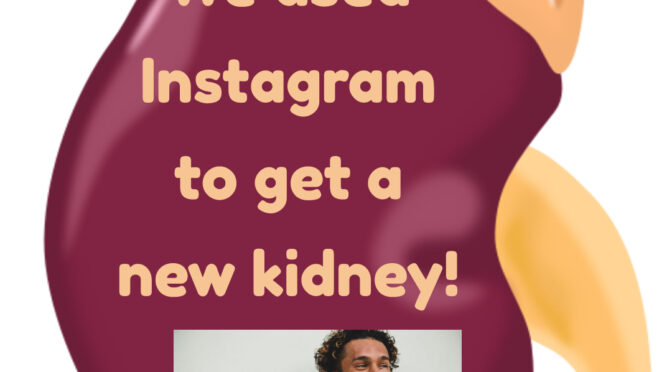 Cam and Jordan are living their best lives, except for one thing: Cam needs a kidney, and Jordan is determined to help him get one. Their plan:

Cam and Jordan are living their best lives, except for one thing. Cam needs a kidney, and Jordan is determined to help him get one. Their plan:

When Stakes are High

Clearly our heroes are in a dire situation. You can’t blame Scene 1’s Cam and Jordan for wanting to get Cam a kidney by any means possible.

The problem is with what means are possible.

Why do we have standards and protocols about kidney donation? Because some means to the end simply are not acceptable in a civilized society.

Advances in medicine made living donor kidney transplants possible in the mid-20th century. It later became clear that there are certain practices that should be out-of-bounds when matching kidney donors with kidney recipients. So in 1984 we put in place standards and protocols to prevent organ harvesting, coercion, and the undue influence of money. Of course we would have standards and protocols, and of course they would be the same throughout the land — not a patchwork of state-by-state laws.

Let’s now consider another scenario, one that also involves humans meeting the needs of other humans at great cost to themselves, also with ample desperation and heightened emotions.

Cam and Jordan are living their best lives, except for one thing. Cam and Jordan cannot conceive and deliver a baby. They are determined to adopt one. Their plan for infant adoption:

1. In private adoption, there is scant national standardization of protocols.

Because many laws about adoption exist at the state level, we end up with “adoption-friendly states.” These are known as places that have laws benefiting adopting parents.✶

Further, the existence of patchwork state-by-state laws allows for Byzantine human trafficking schemes, in which a bad actor can move vulnerable pregnant women around the country to various adoption-friendly states to facilitate gray-market adoptions and make a lot of money in the process, like the Paul Peterson horror in recent years. Even though he pleaded guilty and is behind bars for a few years, you can bet such baby brokering is still happening, most easily in “adoption-friendly states.”

✶And, by extension, also benefiting adoption professionals, who get paid by them. The infant adoption industry was worth an estimated $1.16 billion (!) per year in 2015, with most of the professionals above-board players — but not all.

2. There are unlicensed entities brokering adoptions that have no accreditation…

… are not required to adhere to any code of ethics, and are not accountable to anyone except for the desperate parties they serve. There is no requirement to provide education for the clients they match together about the lifelong impacts of adoption. And if you think that’s no big deal, consider if it’s wise to go into something as life-changing as adopting a child or placing a child and not having any quality education about it.

But perhaps most concerning is that often huge sums of money are involved. These brokers, which often try to look like a licensed agency but are not, spend up to $80,000 per month to get to the top of an Internet search, according to Kelsey Vander Vliet Ranyard, Director of Advocacy & Policy at AdoptMatch.

Pity the pregnant woman who Googles “put my baby up for adoption” and lands in unlicensed/unaccountable hands. Pity the infertile couple who Googles “adopt a baby” and lands in unlicensed/unaccountable hands. Licensed-and-ethical† agencies don’t have the funds to make such investments in Search Engine Optimization because they’re spending their lower fees instead on serving their clients.

Some states allow for unlicensed adoption professionals and some states don’t. See previous point about lack of standardized policy.

† Licensed and ethical don’t always go together. But choosing a licensed professional does offer more recourse in the case of a breach of ethics than does choosing an unlicensed entity.

Unlike with organ donation, which had a defined start date when technology allowed for such a procedure to take place, adoption had no moment when we intentionally decided what an ethical process looks like. Instead, we have muddled our way through Orphan Trains, Black Market Baby Broker Georgia Tann, and the Baby Scoop Era as we gradually enacted (or didn’t) a hodge-podge of state laws, many of them stemming from and perpetuating shame and secrecy rather than truth and transparency.

Secrecy and the ability to operate without accountability are ingredients bad actors need to operate.

Let’s get this out of the way. Obviously, not all — not even most adoption professionals — are bad actors. If you’re reading this and you’re not one, I’m clearly not calling you out. But I am calling out entities that prey on vulnerable women in an unplanned pregnancy and on people desperate to become parents. I am calling on all who care about the ethical treatment of placing parents, adopting parents, and babies at the center of it all, to help reform adoption policies and practices.

Begin to wonder: why don’t we have such standards and protocols also in place for adopting a baby or a child? And start to imagine what adoption should look like if it had similar guardrails to organ donation protections. Then let’s work to put these standardized guardrails in place.

Cam and Jordan are living their best lives, except for one thing. Cam and Jordan cannot conceive and deliver a baby. They are determined to adopt one. Their plan for infant adoption:

Check out this brilliant post by my friend Rebecca Vahle. Because she has created the nation’s only hospital-based education program that addresses adoption (standardized! with accountability! with education!), she has a unique take on the issue.

Change needs to happen. We must be more humane about infant adoption, the way we came to be with living organ donation. If you’d like to be a part of this change, sign up on this simple google form so we can include you in upcoming efforts to legislate protocols and standardize laws in all states. At that time we’ll need you to raise your voice with us, a small but mighty group of people who are determined to make this right in our lifetimes.

One thought on “Two Ways to Adopt a…Kidney?”