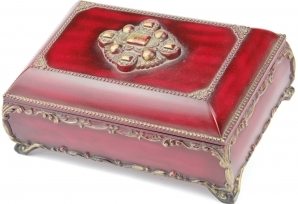 Three years ago, my friend Linda Marie Mueller released her son into the care of someone else. She wrote this post about how this experience gave her a new sense of empathy for another mother who also experienced such a pain of separation.

My Own Christmas Box

I am an adoptive mom. An oh-so-proud adoptive mom … I feel like a mom in every way to my only child Eric, who is almost 20 years old. My love for him spills over and oozes sometimes so much that I am regularly teased about it from co-workers at Adoption Network Cleveland — and my family, too. And, Eric just smiles when I get mushy with him. He knows his mom. He knows my appreciation that I am his mom.

On November 14th, Eric left for 13 weeks of Marine boot camp in Parris Island, South Carolina. We’ll have no phone or email conversations until we see him in Parris Island for graduation in February. We’ve shared amazing letters back and forth, but we’re only halfway through this first extended time apart.

This separation from him has been enlightening to me. It’s brought his birth mother to my heart in a new and deeper way. We’ve all known her these 20 years with our open adoption, and I’ve known and felt her sadness, yet I didn’t feel the magnitude of it until now. This separation is hard stuff. It rips at the soul. It doesn’t feel right. Something is wrong with the universe. Families should at least be together at the holidays.

Yet, I’ve been doing a good job keeping these feelings shoved down and locked into a box. To have them out in the open is too hard. Tears might come. Or worse. I often have wondered all these years why his birth mom hadn’t joined a group of other birth moms to talk about her feelings. Now, I know. That involves going to that box and opening it.

On Christmas Eve, something surprising happened. I was with a relative who is experiencing infertility and when I started to talk to her about knowing the feeling of facing another holiday without a baby, the tears came. It’s the first time since November 14th that I have allowed myself to do that. I was catapulted back to 1990 when I was in depths of infertility sadness. Then immediately, I snapped back to the present day, thinking, “My God, it’s Christmas and I can’t see or talk to or hug my baby.” What the heck? I am healed from infertility! And, I thought I’d been doing so well with Eric away. (Writing him daily has helped keep me sane.) So where are these tears coming from?

Then it dawned on me: I’ve been healed from infertility but I am not healed from knowing how to deal with separation. And, here I was in front of an open box. At least, while I was with that relative, I felt safe. Together, we shared tears. I cried for her facing another holiday without a baby and she for me, facing my first holiday in 20 years without my boy.

When Eric’s birth mom and I have talked about him joining the Marines and being away from both of us, I shared with her how her years of separation from him is affecting me in a whole new way. I said that I have a new appreciation for how hard it’s been on her. Her response surprised me. She said, “You’re not used to being separated from him. It’ll be harder on you.” Whew.

Then I imagined how hard it will be when we both see him in February for just a few short days and again, will have to say goodbye for a while. These next four years of his Marine commitment will have many hellos and goodbyes – much like the countless hellos and goodbyes his birth mom has endured with him over these 20 years in our open adoption.

This revelation has brought big emotions to me this holiday season. Sure, I expected for it to be hard for these first 13 weeks of separation, but I didn’t expect the feelings to go so far and deep –- and to have any connection to my adoption journey. I didn’t expect to approach those feelings long locked away.

Opening the box is good for healing, but for now, back inside you go.

Linda Marie Mueller is an adoptive mom who was among those who embraced open adoption early in the movement, in the 1990s. Her son, Eric, is now 23. Reach Linda directly via [email protected].

5 thoughts on “Christmas Box: Unlocking the Pain of Separation”