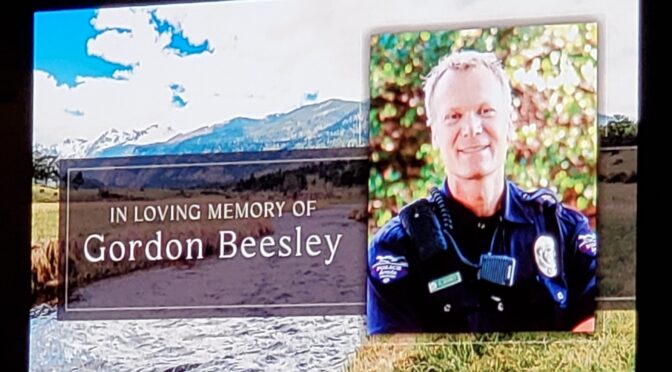 The murder happened first (duh), but I’ll start with the funeral.

Thousands of people attended the memorial services for Officer Gordon Beesley, who had been the School Resource Officer at my children’s middle school. I’m tempted to say 5,000, but my estimation could be off by a little or a lot in either direction. At least half of the attendees in the megachurch were men and women in uniform. The rest were friends of the Beesley family and members of the school community.

The service lasted more than 2 hours and was brilliantly done. It reversed what I’d been doing all week — thinking of Officer Beesley’s death — and took it back to where our attention belonged, on his life.

What a life! His sister told stories about antics “Gordo” was up to as a child. His college friend and a police sergeant told Gordo vignettes that had the somber crowd chuckling. Members of Gordon’s band, the Railbenders, played “Just Breathe” by Pearl Jam, which was absolutely perfect (meet you on the other side).

We learned how silly Gordon was, how he would be the guy who washed dishes after having company over, how every surface was a drum to him, how deeply he loved his wife and sons, and how he and his wife had talked about that hypothetical thing cops and their families have to think about: should the day ever come that I don’t return home…

Interspersed with the intimate Gordo stories was much pageantry. Colorado Emerald Society Pipes and Drums provided large-sound majestic pomp to starting, interspersing, and ending the service. Two bugles, each in a corner of the balcony, played a haunting duet of Taps during the moments of the flag folding and presenting to his widow and sons. I had never heard it as a duet.

Here is the part that gutted us all.

It was said last week that Officer Beesley’s motto was “Look for the good in every day.”

But one of the speakers corrected that. Officer Beesley’s motto was actually Look for the good in everyone.

Click for more stories about Officer Beesley and to watch the entire service.

I visited Olde Town twice in the days after the ambush of Officer Beesley. For some reason, I needed to know what happened. I needed to try to make sense. I felt a bit ashamed, worried that there was a morbid part inside me that was just too rotten to be seen. But also could not be quelled.

Different issue but similar compulsion: Many adoptees have expressed the need to know their roots, their origins, their Chapter 1. They need to make sense of it, and sometimes they are made to feel shame about that need.

I realized that until I knew the ONE story that WAS true, tumbling around in my head were the thousands of stories that weren’t. As adoptees have said, even a painful truth is valuable, because it’s the truth.

To that end, here is a painful truth. A crucial half-second is missing, and I’m OK with that. Not everyone will want to watch, so please consider whether or not to click over.

A senseless murder set off a cascade of events that changed the course of so many lives.

Donations for Officer Beesley’s family can be made through the Colorado Fallen Hero Foundation website. The Arvada Police Department has also set up a web form for people wishing to make non-monetary donations.

There is another hero of that horrible day. Johnny Hurley stopped the shooter and lost his life in another tragic twist that will have a far-reaching and heartbreaking impact. Read an eyewitness account of his actions here, and donate to the authorized GoFundMe here (beware of scams).

Thank you all for your kindness on my previous post. Unifying comments again are welcome; divisive comments are not.

3 thoughts on “The Murder & The Funeral”