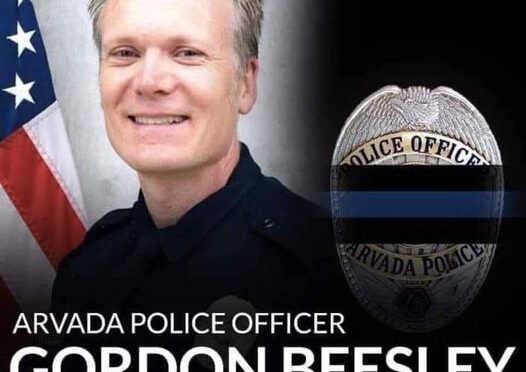 Middle school years are rough. They were rough when I was young, and they’re even rougher now with all the modern ways tweenagers can take out their angst on each other.

Every middle schooler should have an Officer Beesley assigned to them. My kids did. Many of their friends did, too.

Like Mikah in this video, who was at the same school at the same time as my own children. This is a remarkable story of an exemplary School Resource Officer, of an amazing human being 🠗🠗.

I was working at my desk and checked Twitter. What? Active shooter in my town? Can’t be. I’m sure it will turn out to be nothing.

Not nothing. News trickled out that 3 people had died, one a police officer.

I’d hoped it wasn’t any of my favorites. Yes, I have favorite police officers. Over my many years working with nearby families, we collectively begin to know which officers are trauma-sensitive and which ones not so much.

Odds were not in my favor because I had many favorites. My town’s police force is known for being congenial and well-trained, especially with mental health-related calls, of which there are so many these days.

Officer Beesley was at the top of my list of favorites. But it never crossed my mind that the downed officer could be him. He was a School Resource Officer, and the shooting didn’t take place in a school. School was out for summer; surely he was safe (dumb thought, I know).

A few hours later I heard from a friend, a staff member at the school. I hadn’t heard from her in the last few months and was excited to have the chance to get together now that school was out.

“How are you? It’s so great to see your name come up on my phone!” I’d been wanting to reconnect with her now that she was on summer break.

“Ummm, not so great.” I assumed she was going to tell me an elderly loved one was struggling with a health issue.

She continued. “You know what’s going on in Olde Town, don’t you?”

I was slow before, but now the puzzle pieces coalesced in my head and locked in place, quick as a flash and with much force.

“No. No. Nonononono! Not Officer Beesley. NO! NO!”

“Yes,” my friend said delicately, holding back her own sobs. “It was Gordon. I knew your family would want to know.”

I could feel myself falling apart and I didn’t want to add to my friend’s burden. “I’m sorry, I have to go.”

We hung up, both cognizant of the other’s exploding grief.

My husband came in just as the call ended. Those first few moments were of shock and disbelief. Couldn’t be. Not him. Not our Officer Beesley.

I had the sensation of falling. I did drop to the ground. I pounded it. I wailed. I could not stop wailing. After some time, I got myself off the floor and went upstairs, thinking that a shower would help stop the wailing. But my sense of despair was only magnified in the spray of water. I used up all the Nos in the universe, but my lips and throat kept making more.

Why him? Couldn’t we rewind 4 hours — just 4 hours! — to the time when he was alive, and change it up? Have the shooter trip on a pebble before he started stealing people from the community?

What about Officer Beesley’s family? His beloved wife and two middle school boys who, when they last saw him, had no inkling that June 21 would be anything special. WHERE IS THE COSMIC REWIND BUTTON WHEN YOU NEED IT! Just 4 hours. That should do it. Just a little tweak to this iteration to change the outcome.

The murderer was a THIEF. He stole years from Officer Gordon Beasley, he stole a husband and father from his family, he stole a good man from the community, and he stole a beautiful piece of humanity from itself.

By the time I was drying myself off, I was hoarse.

We told our kids, and soon Gordon Beasley’s name was officially released. We are all grieving this tremendous loss.

I couldn’t stop the hurt that caused the wailing, so I consciously numbed myself that night with CBD, a Law & Order rerun from the 90s, and a half-pint of ice cream. I did sleep, but I also kept waking up. Each time I was hit with the new reality that the world no long had this good man in it. It was a Groundhog Night.

I lost it on two zoom calls the next morning. I lost it on my yoga mat, too. My people are so good at holding space for me as I feel the grief and loss (thank you R, S, K, and K).

I don’t really know how to grieve appropriately. Without a guide, I’m going by feel. After all, CBD, TV reruns, and tubs of ice cream are not solutions that will result in actual healing.

I spent Tuesday afternoon with my aforementioned friend, who was very close with Gordon Beesley. We laughed and remembered and honored.

On Wednesday, almost exactly 48 hours after the incident, I took off work to go to the Olde Town square where it all happened. Where shrines were arising, where people were congregating, where I would find others who were profoundly affected by the loss.

What I really after was a place where I could sense the essence of Officer Gordon Beasley.

Not long ago my friend JoAnne sent me a couple of fused-glass hearts made by her husband. She encouraged me to spread kindness someday by giving them away. I took one to the town square with me and left it at a growing shrine with the wish that it will find its way into the hands of Officer Beesley’s family members.

A mother in the square told me the story of when Office Beesley gave her son a citation, for which the boy later had to go to court and face a judge. Seems like she might be mad about that, doesn’t it?

Her son, then in 7th grade, had had a brain injury, and things “just didn’t work right.” The boy had long been defying authority — his parents’, his teachers’, and now a police officer’s. Where would it end if the boy never backed down?

An incident had started with a physical outburst toward a teacher. Officer Beesley first deescalated the situation, then attempted to connect with the boy using humor and a shared interest in music or Minecraft or something. It worked for a bit, but the boy’s emotions flared again and Officer Beesley had to switch from connection tactics to behavior tactics. Calmly, according to this mother, Officer Beesley gave the boy a choice: follow Officer Beesley willingly to the chill room, or have his help in doing so.

The boy was incapable of being directed in that moment, and the result was an escort out of the teacher’s room and a ticket for disorderly conduct.

The mom looked back on that incident as one that helped her son begin to respect authority, and better link in his mind decisions and consequences, all in a not-so-impactful way. She is sure it changed the direction of her son’s life, as he had recently graduated from high school and has a promising future ahead of him.

But that’s not the end of her story.

“Officer Beesley wanted my son to know he could trust him, and that he loved him, no matter what. He went that extra mile to restore trust.”

I am bereft that I will no longer see Officer Beesley riding his patrol bike on the streets of my neighborhood — a small thing, for sure. But it’s also a huge thing.

I have stopped wailing on the outside, but it will continue for some time on the inside. Something really special was taken from us on Monday.

Donations for Officer Beesley’s family and funeral expenses can be made through the Colorado Fallen Hero Foundation website. The Arvada Police Department has also set up a web form for people wishing to make non-monetary donations.

There is another hero of that horrible day. Johnny Hurley stopped the shooter and lost his life in another tragic twist that will have a far-reaching and heartbreaking impact. Read an eyewitness account of his actions here, and donate to the authorized GoFundMe here (beware of scams).

Unifying comments of love and support are welcome. Divisive comments about guns or whose lives matter or anything else are not.

13 thoughts on “In Honor of Fallen Police Officer Gordon Beesley”