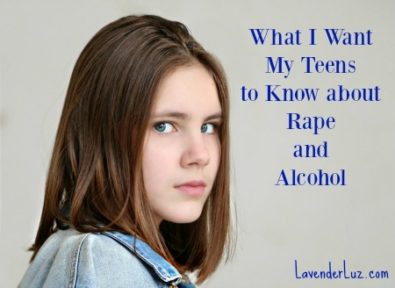 Back before Orlando and Istanbul, when we were still talking about Stanford rapist Brock Turner and the rape culture that he, his parents, and the judge arose from and perpetuate, I remember reading lots of opinions about the fact that alcohol had been involved. The gist was something like this: just because the survivor was drunk doesn’t mean she was to blame. (Example.)

True that. I absolutely agree.

And still, it feels to me like we got hung up on assigning blame, which prevented us from discussing prevention.

I want my kids to understand the perils of getting drunk (or compromised by any means) and the possible scenarios that can unfold when they are unable to make sound decisions for themselves.

Does my wish stem from a blame-the-victim mindset? I think not, and here’s why.

Imagine you’re doing everything right as a driver. You have a green arrow to turn left at a busy intersection and are doing so. You’re doing nothing wrong.

But there’s another guy barrelling toward you, running his obviously red light. Maybe he’s texting or otherwise distracted. Maybe he’s an entitled jerk. Who knows.

You don’t expect that he’d so brazenly break the law. His car hits your car. Your life changes in an instant.

But still — you have injuries. Your car is totaled. You have physical and emotional pain, not to mention logistical inconveniences. Your life is derailed, at least for awhile.

As both my daughter and son near driving age, and later partying and drinking-alcohol ages, I’m thinking a lot about how I’d like to approach driving, partying, drinking. I go over and over conversations in my head. Here’s what I’ve been thinking, especially about driving, our most imminent frontier.

When someone learns to drive, we teach them what they need to know to not cause a collision. We want them to never be at fault or to cause themselves or others suffering.

But that’s only part of keeping a new driver safe. We also aim to teach them how to not be in an accident — how to avoid a collision by someone or something else that is the cause. We teach them to drive defensively, to watch out for the other guy, the deer, the road debris, the unexpected.

I want my kids to understand that the goal is to not be in an accident. The goal is not merely to avoid CAUSING an accident. Because whether or not you are at fault, if an accident happens to you, you’re still in it. You still suffer whether your blame-level is 0% or 100% or somewhere between.

What do you think? Is it misguided to mention drinking alcohol when discussing sexual assault with teenagers? How did/will/would you talk with teens about navigating around these important decisions?