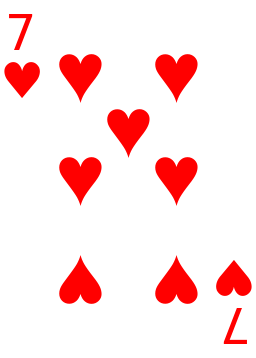 I’ve always loved seven, or, as Brad Pitt might type, se7en. It’s prime. It’s imbalanced, yet sturdy. It’s grounded but reaching. Other than zero, it’s the only digit that requires more than one syllable. Seven is special.

I feel the same affinity for the number 7 that I do for the letter L. I lo7e them both.

There are seven chakras, seven dwarfs, seven notes on the musical scale, seven colors of the rainbow, seven days of the week, seven wonders of the world, seven seas and seven continents. Some championships come from a best-of-seven series. There are seven sisters and seven samurai. I suppose there may even be some fun in the seven deadly sins if you have a measure of self-control.

The 7 is the mystic and the philosopher, the number of creative, mental activity and spiritual evolution. The 7 relates to cycles of time and the movement of the sun and the planets as seen from Earth. Many vibrational things, such as chakras, colors, and musical notes, come in 7s. — Source.

Hmmmm….d’ya think that resonates for me?

Thank you, Friends, for joining me on this 7 year journey and celebrating my hepta milestone with me.

Wanna send me to seventh heaven? Tell me something about your favorite number. What do you like about it?