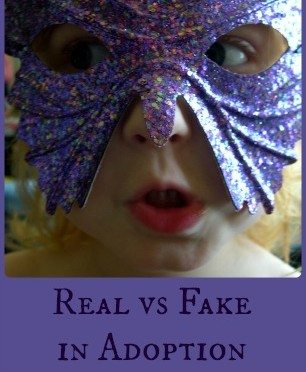 We were thrilled to hear that my son’s birth mom had put us on her itinerary during her visit to Colorado.  Reed hadn’t had contact with her in nearly 4 years, and for the first time he would meet his half-siblings, ages 3 and 1.

Reed showed no signs of either distress or euphoria in the weeks leading up to Michele’s visit or during her dinner with us. Nor did he after she left. For him, and for her, Even Keel seems to be the name of the game.

The surprise was in a conversation with Reed’s sister, Tessa.

“You know, Mom,” she said as I peeled carrots for that night’s dinner with Michele and her children. “Reed’s not my REAL brother. He’s just a step.”

My heart stopped and then broke into pieces. Since the first day of Adoption School nearly 10 years ago, I had been prepared to be discounted as a real mom, but it never occurred to me that my children might discount each other. I was saddened and knocked off balance, not knowing what to say.

So I resorted to my habits when I get adoption stress: Breathe. Be aware of my breathing. Silently ask for wisdom and guidance.

“What does it mean, Tessa, to be a real brother or sister?” I asked, mindful of the peeler and the tender web of skin between my forefinger and thumb.

“You mean because your birth parents are Joe and Crystal, and Reed’s are Michele and AJ?”

“Yeah. We come from different parents. So we’re just steps,” she repeated the phrase that she was stuck on, that we were now both stuck on.

Tessa had been trying to figure out “steps” since reuniting with Joe two years ago. Joe and his wife have a daughter (Tessa’s younger half-sister) and the wife has a son from a previous marriage, Joe’s stepson. Who was, in explicit terms, her birth-step-brother (or step-birth-brother?).

Likewise, Crystal has a son (Tessa’s older half-brother) and Crystal’s boyfriend also has a son, who is not technically Crystal’s stepson but is considered a full-fledged son. This boy was, explicitly, Tessa’s practically-birth-step-brother.

Got all that? It’s a lot for anyone, especially for the 9 year-old in the center of it. If only “step” were as straightforward as the stool Tessa was perched on.

“Well, Sweetie,” I began, moving on to chopping celery, “Could it be that you and Reed actually have TWO sets of REAL parents?” I emphasize the words that encompass and validate.

“No, Mommm,” she said, exasperated with me, feeling prickly. “Real means the people who are really your parents, the ones who made you.”

So I pulled out my stock answer, which I thought would be used only on curious strangers who weren’t acquainted with so-called Positive Adoption Language. And I spontaneously added some levity.

“Well, you know what THAT means, don’t you?” I said with a twinkle in my eye as I dried my hands on a dish cloth.

“What?” Tessa said uneasily, until she realized that I was about to get her.

“That means…” I picked her up (I can still do that, though not for much longer) and carried her into the adjacent family room where we have room to play.  “That means that Fake Mom changed 5000 of your diapers!” I tickled her sides.

“And Fake Mom sang you all those lullabies!” I tickled her underpits (as Reed calls them).  I got nose to nose with her, giggled hysterically with her, locked eyes with her.

She joined the game. “Fake mom makes me do my homework! Fake Mom tickles me! Fake Mom takes me for pedicures!”

Soon we were out of breath from laughing so hard.

I propped myself up on my elbow and brought the level down a bit. “Sweetie, both Crystal and I are real. Both Joe and Daddy are real. And Reed is real, too. Who fights with you over popsicle flavors? Not Fake Brother. Who annoys you when you have a friend over? Who plays School with you and always lets you be the teacher? No Fake People live in this house.”

“I know what you mean, Mama.” I know when she uses this term when she has softened.

Michele, who had been playing with Reed and her children in the backyard, entered the kitchen to retrieve a diaper bag. Tessa and I pulled ourselves up from the family room floor and joined her in the kitchen. The conversation was over. This time.

I realize that there was no final resolution, no definitive happy ending to this very complex issue. This was merely a pause in what will be a very long story arc. But there was progress in our process. Tessa and I worked through something, we connected, we allowed each other the space to explore and talk.

67 thoughts on “What Does “Real” Mean? Adoption Talk with My Daughter”