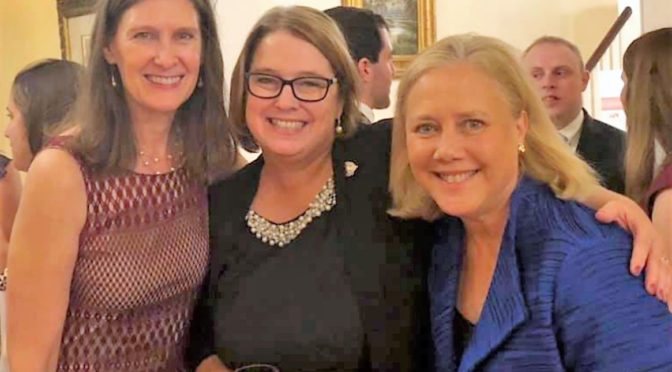 Following Monday’s events, the story of Tuesday has four parts: the pinning, a meeting with White House staff, seeing my fairy blogmother, and being a guest in the home of a former Senator. 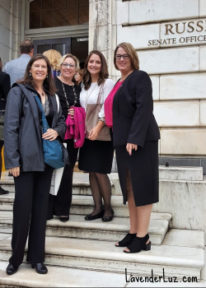 The person who nominated me, Senator Michael Bennet (CO), was unable to attend the ceremony. Fortunately though,  former Senator Mary Landrieu (LA), who has become a big supporter of the Family to Family Support Network, decided to fill in and present me  as an Angel. 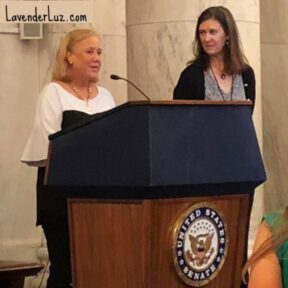 The Congressional Coalition of Adoption Institute (CCAI) awarded each angel a pin. 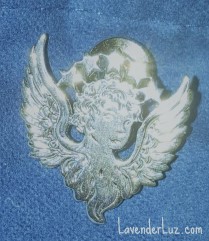 Around us the Russell Senate Building was preparing for the media presence for the Kavanaugh hearings.

We left the breakfast meeting for lunch at an iconic restaurant, excited to prepare for our early afternoon engagement.

Though this meeting was merely adjacent to the White House, it was held with a White House staffer in the same building where the National Security Council meets.

Rebecca, Janelle, Dixie, and I were there to advocate for Family to Family Support Network. We are four women (and there are more of us) on a mission to educate staff in hospitals. Our goal is that all women giving birth under unique circumstances are empowered to make their own best decisions for themselves and their babies. 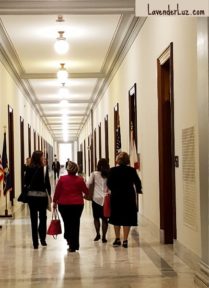 For happy hour I had another meeting. It was affirming and heart-zinging and overall amazing. Who made me smile so hard my face hurt?

Seeing the Woman Who Started it All

You became an Angel in Adoption® in part because you wrote a book on adoption. You wrote a book on adoption because you had a blog about adoption. You had a blog about adoption because almost 12 years ago you stumbled on Stirrup Queens, who invited you to start a blog. You became fast friends with the blogger behind Stirrup Queens, Melissa Ford. But you and she live far apart, and ever since you stopped going to blogging conferences together, you only get to see her when you find yourself in Washington, DC.

My heart was full. Hopefully until our next meeting.

I left Melissa (that was HARD and took many many tries) and walked to a Capitol Hill neighborhood for an fahncy reception. I was still in my street clothes.

Straightaway I sneaked into a bathroom to change into the more elegant attire I carried in a very unglamorous bag. Then I stuffed my yoga pants and walking shoes into the bag, which I then shoved into a nearby closet. I tried to appear as though I attend cocktail parties on Capitol Hill all the time.

All day and all night I could not stop smiling.

Up next: Day 3 included visits to the offices of a Colorado Senator and a Colorado Congressman. Plus a House Foreign Affairs meeting, and getting gussied up with the ladies to attend a gala. Stay tuned.

13 thoughts on “The White House: Day 2 of Angels in Adoption®”