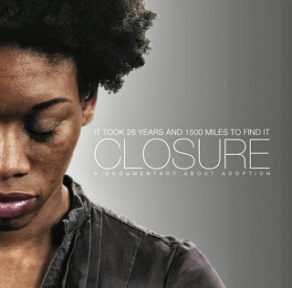 Angela Tucker is a transracial adoptee who joined a family in the Pacific Northwest after being born in the South and placed into the foster care system. Closure is a film that documents Angela’s two-year search for her birth family and its efect on her, her adoptive family, her husband, and, of course, members of her birth family.

A special Denver screening of this film will take place on May 7 and May 8, sponsored by the Colorado Department of Human Services and Adoption Options in celebration of Foster Care Month. These events begin at 7 pm and are held at the Sie Film Center at 2510 E Colfax. Due to limited space, advance tickets are highly recommended.

What makes this screening so special? Angela Tucker and filmmaker Bryan Tucker will appear after the film’s showing to answer audience questions.

And I’ll be joining their panel the evening of May 8. I’d love to see you there.

Closure is a gripping story full of emotional highs and lows, and it gives adoptive parents like me a peek into the hidden wonderings adoptees can have about their origins and the pressures they may feel to act on their curiosity — or not to.

From Either/Or to Both/And

As Angela’s story unfolds, I witnessed how some members of her adoptive family began in an Either/Or mindset — either WE’re her family or THEY are. But out of their love for Angela, these same people were eventually able to cultivate a Both/And heartset. For example, Angela’s adoptive sister asks, “Aren’t our parents enough?” And Angela’s mom says early on, “I did worry about being replaced as a mom because I wasn’t sure I could handle that because they were MY kids.”

But later, Angela’s mom says, “As Angela got older I really felt deeply like I was her mom. In her 20s I realized it wasn’t going to change my status as being her mom if she found her birth mother. And I became as curious as her. Who was her birth mother? What’s her story?”

The power of family member’s love for Angela and their security in her love for them help make the crucial shift that supports Angela in her pursuits. I adore this depiction, and wish all adopting and adoptive parents could see how easily such a shift can be made.

I’ll leave you in suspense about how birth family relationships develop. Who is found? How meandering is the search? Who embraces Angela and who denies her? What happens at first meetings? What happens after that?

I urge you to watch this film (if you’re not able to attend the screening, you may also rent or buy the film, starting at $4.99)

The theater is small and the event is expected to sell out, so get your tickets now.

“For the rest of my life I’ll be connected”

I’ll share two more quotes from Angela’s birth family members that stood out for me.

Angela Tucker blogs at The Adopted Life and will return to Colorado this summer to mentor young adoptees at the African Caribbean Heritage Camp.