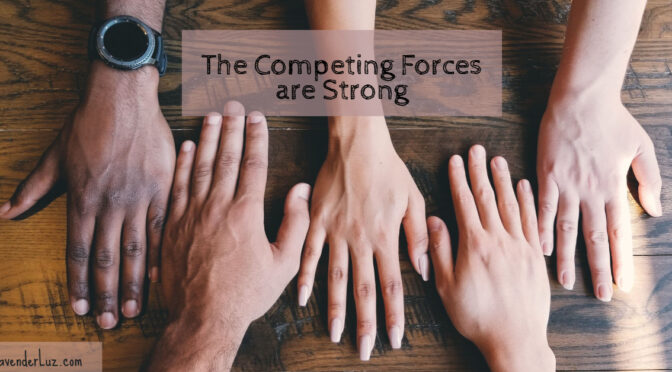 There are two competing forces exerting pressure on me these days. Maybe you feel them, too.

Here’s a list of things in my life that tell me it’s possible — desirable! — to bring opposites together, to transcend beyond the duality of opposites.

Here’s a list of current subjects that are highly polarized and emotionally charged.

Do you also feel the push to polarize, to be on one side or the other, and classify others similarly?

Where Will This Lead?

No surprise to anyone, 2020 has a lot of opposing going on. The societal pulling apart, which has been amping up since at least the 2000 election, seems to be accelerating and crescendo-ing. What is its trajectory? Where will the current path of discord take us? What possible outcomes are there, and which one is most likely?

We all come at things with a unique perspective. Things look different depending on a person’s experiences, wiring, and vantage point.

How might we allow for the BothAnd of these polarizing issues? How might we transcend beyond the duality?

Who Benefits from Polarization?

This ongoing trend of increasing polarization isn’t making anyone happy, but it is making purveyors of discord rich and powerful. Cable news networks have got to be making gobs of money with so many tuning in to their brand of echo chamber. Fomenting discord is in the interest of media organizations (as opposed to news organizations) that have the attention of masses of people they can sell advertising to. Polarizing is an excellent strategy to gain and keep that attention — and the revenue flowing.

There are regimes around the world that would benefit from United States crumbling from within, and are, perhaps, throwing apples of discord into our race. A bot campaign would be so much cheaper and easier than a military war. But it would require that we fall for the trick of polarization.

This post itself may end up being polarizing. Maybe I have this all wrong. Perhaps it IS better to be very clear where you stand and not waver, and to consider those who disagree just plain wrong. I can see the appeal of living more in certainty than in complexity. It’s possible I am missing the boat here.

But the way I’m wired, the growing polarization feels like doom.

Maybe These are Not Competing Forces After All

Turns out physics brings in the missing piece. Andrew A. Ganse, a research physicist at the University of Washington, offers the transcendent unity between competing forces that I’m looking for.

“Centripetal force and centrifugal force are really the exact same force, just in opposite directions because they’re experienced from different frames of reference.” (LiveScience.com)

Centripetal and centrifugal — they seem like opposites but really they are “the exact same.” Just with differing frames of reference.

I’ll be trying to figure this out long after the election — and all that follows the election.

What do you think about practices and traditions that ask us to encompass all parts? Should we? Can we? If so, how?

Also this: Sometimes we do need to take a stand. What is the criteria to discern when, and can it be done in a non-polarizing way?

5 thoughts on “Competing Forces: Centripetal In Here and Centrifugal Out There”