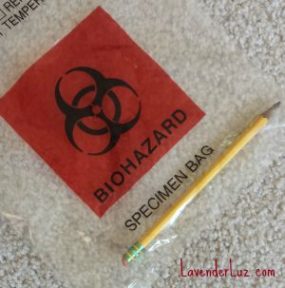 Three things no parent ever wants to hear in the same sentence. But that’s what I heard when a police officer called me yesterday afternoon shortly before I expected my kids to come bounding in the door.

I shove my feet into shoes and snag my purse on the way to the car, probably in 2 seconds total. The officer tells me over the phone where the bus has stopped. Good, now I know where to go. He kindly warns me that when I come upon it, it will look like a crime scene, with lots of lights and sirens and emergency vehicles. “So don’t freak out,” he says.

Wait, what? I think to myself. I must have missed something. If my child has been stabbed I am most certainly going to freak out.

I begin to listen better, and he tells me that this incident was first reported as a stabbing, but it’s looking like it actually isn’t. I try to figure out what could have happened as I wait at the longest light in the history of American traffic.

Sure enough, as I finally pull up, there are eight or nine vehicles flashing their lights around the bus — all that’s missing is a news helicopter above. People on the street are rubbernecking to figure out what’s going on. The lady in front of me is blocking my attempts to turn and park and GET TO MY SON. I honk and she flips me off out her sun roof but at least she starts moving.

I park and run to where my son is being loaded into the ambulance. His sister is beside him, stroking his very pale face. I can see she’s working very hard — successfully so — at being the calm one. It suits her.

I climb into the ambulance while the paramedics cut away Reed’s clothes. He starts crying as I connect with him wide eye to wide eye. I touch his arm and ask if he’s in pain. “It hurts so bad!” I look at his belly.

He’s got a pencil sticking out of it. Two inches show. No one knows how much doesn’t show.

“And these are my favorite shorts and shirt!” I can hear his exclamation point even though he’s only able to whisper.

His panic is rising and as his color is fading. There isn’t much blood coming from his wound; he’s going into shock. The paramedics start an IV line and drip morphine into my son. They also immobilize the pencil by taping gauze around it. A police officer continues snapping photographs of him “just in case this does turn out to be a crime scene.”

Tessa rides in the ambulance with Reed and I drive to meet them at what will turn out to be just the first hospital of the day. I’m not thinking ahead much but I’m guessing we’ll need a car.

Six hours, two hospital ERs, and countless nurses later, Roger and I are waiting to see how surgery went. We shake our heads at the story we’ve pieced together.

Every weekday afternoon the bus goes down a big hill. At the top of it, many boys on the bus treat it as their daily roller-coaster ride, giving a little jump at the crest of the hill.

This time, a boy behind Reed gives him a “boost” (that’s what the kids call it). As far as I can tell, that means he got a well-intentioned lift in the air. In addition, Reed happened to have a pencil in his pocket. This is the set of facts that let to us being in our 2nd hospital and 6th hospital room of the night.

Tessa, not even sitting near her brother, Tessa was the one who somehow made the bus driver stop within about 20 seconds, by the time the bus was at the bottom of the hill. I’m guessing this is where the misreport happened. The emergency was primary; an accurate assessment was secondary. And that’s OK with me.

It’s nearing midnight, and a nurse at Children’s Hospital come to tell us our son is done with surgery and he’s fine. The pediatric trauma surgeon later fills us in.

She had to explore the abdomen prior to extracting the pencil to see what damage it may have done Unfortunately, it did pierce through the muscle wall and perforate the large intestine. And unfortunately, there were about 4 inches of pencil inside his belly. Fortunately, his body had already begun to fight off the invader by sealing off the breached areas. He won’t be going home tonight, but he will be going home soon.

Now that the pencil is out, we just need to deal with antibiotics and pain management.

I stay the night and much of today in the hospital. This was my view of my family as I left to freshen up. 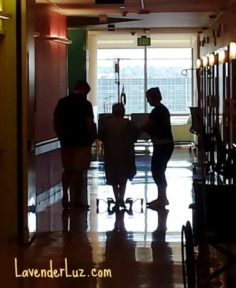 I’m tired and hungry and stinky and off to nap, eat, and shower, not necessarily in that order.