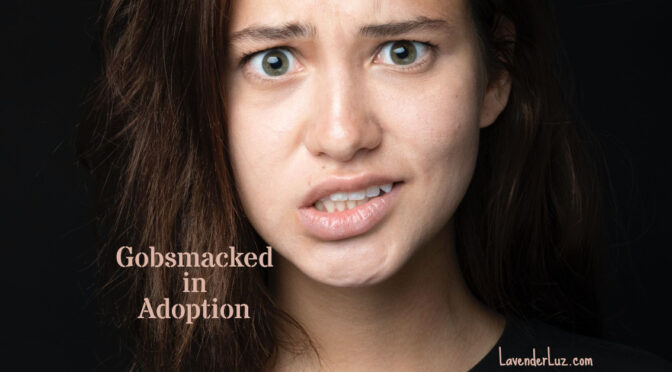 I’ve long advocated for openness in adoption for the sake of the adopted person, the baby/toddler/tween/teen/adult who is gradually building their identity, their relationships, and their patterns for how they will move through the world.

But, as an advice column in Slate shows, openness can also save the adoptive parents from a world of hurt. Namely, of being gobsmacked by their son’s/daughter’s “sudden” interest in birth parents.

The Either/Or mindset that we inherited from the Closed Adoption Era is so strong and so prevalent. As a result of it, some parents cling to the hope that, to their child, they are the only parents. As if to confirm their bias, they assume that if the son/daughter isn’t talking about birth parents, that they aren’t thinking about them.

Then they are surprised to find out they were wrong all along. By then, it’s too late. Damage has been done.

Care and Feeding, Slate‘s parenting advice column, got it right when Tale of Two Moms wrote in, devastated by the discovery that her near-adult daughter had been in contact with her birth mom:

We did a closed adoption and have never had contact with the woman. I am in shock since my daughter has always accepted us as her parents. I didn’t think she cared who her bio parents were, or about being adopted. Sure, she occasionally would have questions about where she came from, and we talked openly about her adoption, but it was just something that existed that we didn’t really acknowledge regularly.

(Perhaps using terminology like “the woman” is an indicator of the true vibe going on within the letter writer and perceived by the daughter.)

What’s at the Root?

Apparently they’ve been talking for about three months, but she hadn’t told me because she was afraid we wouldn’t approve or we would think it was a rejection of us.

I know I should be happy that they’ve been reunited, but I can’t help feeling hurt and rejected, like I’m not enough for her. I am terrified that this woman might try to take over my role in her life, and become her mother figure in adulthood. I’m also apprehensive because my daughter has kept their relationship a secret.

What is often the root cause of an adoptive parent being gobsmacked? Fear. As ToTM reveals, fear (“I am terrified”) of not being The Only, fear of being supplanted, fear of disconnection from the beloved child.

But by not acknowledging the fear and not dealing with it, things only get worse. Instead of connection, there is disconnection between parent and child. (This is why so many of my expert guests on Adoption: The Long View podcast advise to “deal with your stuff, people!“)

Gobsmacked mom doesn’t want to be part of the reunion

ToTM gets to the reason for writing in:

My daughter is now wanting to involve me in the in-person reunion, and her bio mom wants to meet me, too (we never met when I picked my daughter up from the hospital). I don’t want to go. I appreciate this woman for giving me my daughter, but I chose a closed adoption for a reason.

Trying to include bio mom in our lives will make things more complicated and likely end up with heartbreak for my daughter if things end up going badly. I don’t know what the right thing is to do. Part of me believes I should go if my daughter wants me to, but I can’t help feeling like there will be a lot of tension. I am concerned, at the same time, that turning her down could lead to her pushing me away and toward her bio mom … but I’m also concerned that the same could happen if she meets bio mom and decides that she’s more her mom than I am.

Do you hear all that Either/Or language? It’s tragic that adoptive families still operate from this Either/Or mindset from the Closed Adoption Era. It makes everything for everyone so much harder than it needs to be — for adoptive parents as well as adoptees.

If for no other reason than enlightened self-interest, adoptive parents should choose a stance of openness rather than closedness.

3 Tips to Avoid Being Gobsmacked

If you don’t want to be on the receiving end of shocking news about birth parents from your son or daughter, here are 3 simple tips:

Simple? Yes. Easy? Easier than being gobsmacked. Still, none of these are things you do once and then check off the list. Each requires ongoing vigilance and maintenance. Like all relationships.

Slate’s Advice Column Got it Right

Your daughter is offering you the chance to participate in something that’s important to her. Is she making that offer because she truly wants you and her bio mom to get to know each other? Maybe—maybe simply sitting with the two of you will be helpful to her and bring her a sense of wholeness or resolution that she is seeking as she enters adulthood. Or maybe she is asking you to join her simply because she wants you to feel included, to make it clear to you that her desire to meet her bio mom is not a rejection of you. Or how about this? Maybe she’s nervous about this meeting and wants to be able to lean on her mom.

There’s more, and it’s all so good. Bravo to Slate’s Care and Feeding for nailing it. I urge you to read it all.

Stop the Gobsmacking — Do Your Work, People!

Why go to all this trouble of opening up and becoming vulnerable, to doing something that’s outside your comfort zone, to continually expand that comfort zone? As Care and Feeding says:

Because you are her mom, and that’s what moms do.

What do you think about the advice given by Care and Feeding on Slate?