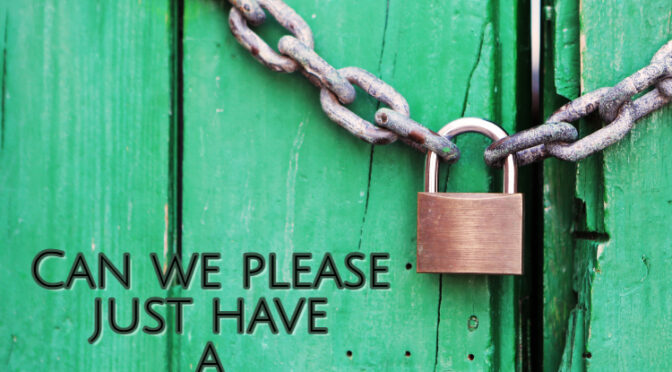 Hello, 30something woman on baby forums and infertility groups. May I call you Jessica? You don’t know me, but I was once where you were. I had finally met the man of my dreams, the guy I wanted to build a life with, the father of my future children. I felt so lucky!

Then after a few years of near-unbearable amounts of physical and emotional pain and expense, it became clear we could not make a baby. No way, no how. End of story. Not gonna happen. So WRONG. So unfair. So unlucky.

It was the most horrible thing I’d ever been through. It almost broke me. I was so deeply hurt. Angry. Jealous. Lost. Devastated. I couldn’t take much more. I wanted to be a mom. Was that so wrong? People do this effortlessly — even accidentally! — all the dang time.

Prefer to listen? A version of this post is excerpted
in Episode 209 of Adoption: The Long View.

Eventually, we set foot on the path of adoption. Surely after all we’d been through, the gods would bless us with an easy path. Surely we deserved something simple and doable. After all that bad luck, things had to even out, right? Please god, just bring us a baby. We will be the best parents ever. I promise promise promise.

By the time our feet were on that path, I was of the dreaded Advanced Maternal Age of 35. Which mattered because along with an adoption attorney or social worker, some 16 year old pregnant woman was going to be the one making the decision on whether or not I would be the one to parent her baby instead of her. This open adoption thing meant I had to impress her, appear young and cool to her. She was going to be in charge of my fate.

I Want a Closed Adoption

Open adoption. If I have to do it this way — get picked by a stranger judging me — I will.

But have her in my life forever? Nuh uh. I draw the line. Can’t do that. Not gonna happen. I’m definitely not wired for this open adoption stuff. I want one like the good old days. Closed. Clean. Simple. Done.

That was 20 years, two children and four birth parents ago. This month marks 20 years since our feet hit this path and we started the home study process. I’ve been remembering all those emotions lately, as I look over all that has happened and changed within and around me in the last two decades.

Boy, Did I Have Some Unlearning to Do

If I may be so bold to suggest, Jessica. maybe some unlearning would help you, too. To paraphrase Mark Twain and others,

‘Tis better to know nothing
than to know with certainty what ain’t so.

Not everything you “know” about adoption turns out to be true. Let me share with you three of the biggies.

Unlearning 1: Closed Adoption was good enough for before

Instead: People still think of Closed Adoption as the default setting, but really, it was a failed experiment of the mid 20th century. Once the children and mothers who were unwittingly involved in that experiment raised their voices and joined their voices, adoption professionals began to understand that policies based on shame and secrecy didn’t always yield healthy individuals, resilient psyches (including adoptive parents!), and functional families.

There has been a decades-long turn toward truth and transparency, which — no surprise — offers better outcomes for everyone involved in adoption — including adoptive parents!

(Exception: truth and transparency is NOT proving better for unscrupulous adoption professionals, but that’s another story).

Unlearning 2: Open Adoption is measured by contact with birth parents

You’re in an open adoption only if you have some sort of contact with birth family.

Instead: Contact with birth family is the common measure, but it is not the only measure, nor even the best measure. Are we talking about quantity of contact, quality of contact, the type of contact? It’s a very imprecise term to talk about what’s going on between adoptive parents and first parents.

And it measures the wrong thing.

Consider instead openness, or open-heartedness, which centers more around the relationship between you and your child. It offers you a way of tuning in to yourself, seeing from your child’s perspective, and choosing your response in a way that best serves all in any challenging moment.

You will have these challenging moments whether or not your child’s birth parents are around. See Adoptees are in Reunion Whether They’re Searching or Not by therapist and adoptee Lesli Johnson (my podcast interview with her was just released!).

When new adoptive parents start practicing openness and realize all the richness and closeness it brings between them and their child, they naturally begin to desire contact with birth parents.

They long for it, just as you’re longing for its opposite now. Those who are prevented from having contact, due to any number of factors, become very sad for the missed experiences and relationships they and the child will not get to have.

Instead: Jessica, if you were to get what you wish for, you would have simplicity –I’ll grant you that. No other parents to acknowledge, no visits to coordinate, no pictures to send, no messy relationships to navigate, no other mom to compete for your child’s love.

But you’d also be missing out on so much. Feeling joy after inviting your son’s birth mom to his kindergarten graduation and watching him beam because of it. Being able to ask for health history when your daughter has repeated sore throats. Having another man watch your son play baseball with just as much pride as your husband does. Being able to call a birth parent when your daughter is feeling sad about missing them.

Openness is about relationships, not just contact. And relationships can be messy. But there is a richness to that beautiful mess. Trading simplicity for complexity isn’t a bad thing when it comes to such integral people in your child’s life.

As you grow into being a mom, Jessica, you will grow to be willing to do anything to meet your child’s needs — including working on your own fears and insecurities, which often prove to be much less than we make of them anyway. You will provide your child with anything that helps them gather and integrate their pieces. You will resolve to deal with your own stuff so that you can be the mom you’ve always envisioned being. You will become fearless and wise in providing everything necessary for your son or daughter. Jessica, you are up to this. You can open to this.

I know all the uncertainty ahead of you, amid all the defeat you’re wanting to put behind you, can make openness seem insurmountable now. Please unlearn some of what you think you know. Please listen to people who have been there, done that, survived and thrived. Please also listen to those who grew up in the shame, secrecy, and insecurity of a closed adoption.

Please consider shedding some old non-valid ideas and opening up to new information, for your own sake as much as for your future child’s. You do not want to be that fragile, brittle mother who gives her little baby the big job of making mommy feel validated, worthy, whole. That would be YOUR job to do on yourself, as well as for your child.

It’s doable. It’s rewarding. It’s worth all the hassle and complexity. I promise.