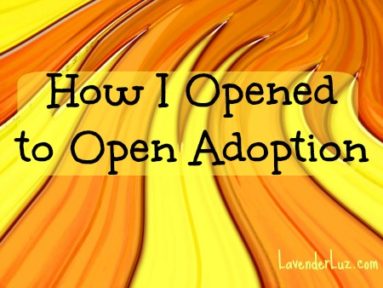 Everything I Knew About Open Adoption Was Wrong

Many years ago after we’d run the gauntlet of infertility diagnoses and treatments, we set out on a new and daunting journey, that of adoption. We thought that meant waiting in a long line until our number came up, when an agency would call us with news that we’d gotten to the top of the list and our baby was available. We’d live happily ever after, never to think about adoption again.

Turns out all that was wrong. There would be no line, no list, no adoption-be-gone. Instead, there would be an expectant mother considering adoption (and possibly father), and our fate would be in HER hands. Further, she/they might want to be involved in our lives now and forevermore.

The thought of that scared me so much I had half a mind to return to my reproductive endocrinologist and endure more pointless invasive procedures.

I had to calm myself down. I had to examine my fears. I had to open myself to the scary unknown.

At first I thought my husband and I would be the stars in our family-building drama, but as events unfolded, I realized it would instead be more of an ensemble piece. I had to get to know the others who would be cast. My motto has always been, “if at first you don’t know what to do, seek knowledge.”

I began to get more familiar with the perspectives of birth mothers, first during our adoption agency’s homestudy process, when we  met a panel of women, each who had placed a baby. Next was through adoption forums and blogs, places where both adoptive parents and birth parents, as well as adoptees, shared their experiences, sometimes leading to difficult but valuable discussions as we sought to understand the others’ viewpoints.

Then I began tuning in to adoptee voices. These helped clue me in to possible experiences my children might have, ways moms and dads parent and the effects those ways can have on sons and daughters in building trusting relationships and forming identities.

I realized our story would more likely have a happy ending if I morphed my Either/Or mindset (so prevalent in the closed adoption era) and embraced instead a Both/And heartset.

Gaining knowledge and making a new plan that felt expansive — these things helped me calm myself down.

There were so many fears.  The biggies:

In other words: If there’s another mother around, how can I be the Real Mom?

I dug these out of my not-so-sub-conscious and took a deeper look. Like other creatures that thrive in the dark, many of my fears evaporated in the light.

I saw that it wouldn’t be right to put a child in the position of having to rank their moms. I decided I didn’t need to split my child to meet my own needs. And I wondered if it might actually be a joy to share. Someone who loves bragging on my child the way I do? That just might be fun.

After looking at things from my hypothetical child’s view, I knew I had to find a way to avoid splitting the baby. I decided to declare myself Real. And the other mother, as well.

Open Myself to the Scary Unknown

Just about everything good that’s ever happened to me, and to many other #LivingFearless storytellers, has come from jumping into the unknown. Going to college far away from home. Moving to Japan. Getting married. Teaching in Syria (pre-war). I had no reason to believe that becoming a mom through open adoption would be any different.

My regrets have more often come from closing myself down and shutting myself off from scary things.

The day we were to bring our daughter home from the hospital — and despite the advice to head straight home and make a clean break —  we instead carped the diem. We made an unexpected detour, jumping headfirst into the scary unknown.

That leap, and all that’s come after it, continued my determination to cultivate a #LivingFearless life.

17 thoughts on “How I Opened to Open Adoption”