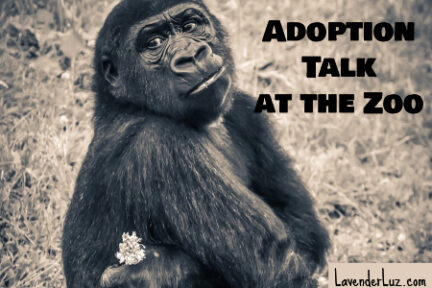 An adoptive mom had and adoption-related experience at her local zoo this summer, one that bothered her. Lauren C asked in an adoptive parent group if she should say something about hurtful language spoken by a staffer. I invited Lauren to share the situation and her thoughts here.

Lauren C: With first grade looming for our daughter, many of our previous struggles are receding in hindsight. The obstacles my husband and I faced in our infertility struggle, and the early years of getting our footing as adoptive parents have faded into distant memories. Now we may face new adversaries such as bullying, standardized testing, and ADHD.

Our family has created a comfortable practice of open communication with our daughter’s birth family. Our daughter’s most complicated adoption-related question this year has been Which costume do you think my birth family will like best for my next performance?

I’m pleased to say that the awkward and inappropriate comments from friends and family have all but ceased after six tireless years of us educating well-meaning people. I finally felt that we had reached our sweet spot in the world as an adoptive family.

This is why I was not prepared for our most recent trip to the zoo. The Jacksonville (Florida) Zoo & Gardens recently introduced their newest gorilla. Gondai was born to a mother who turned out to be unable to properly care for her infant. Therefore, another female gorilla stepped in and began raising her. The story has made national news, and I was excited to introduce my daughter to this loveable primate and continue to normalize adoption as part of daily conversation.

As we watched the young gorilla play and annoy her napping mother, I was reminded of the many similar naps I have had interrupted by my own playful daughter. While blissfully reminiscing to myself, I made a comment to the zookeeper about how similar the gorilla’s mom-life was to my own.

I was yanked out of my fantasy to be harshly reminded by the zoo employee: this was Gondai’s “surrogate mother,” not her “real mother.”

Words Can Pack a Punch

The words stung me. I thought I had worked through my feelings of guilt and inadequacy years ago. Yet, here I was fighting back tears as I tried to explain to my daughter what the zookeeper meant by “real” and “surrogate.” I worried the words might sting and confuse my daughter, as well. Was my 6 year-old having similar feelings over the dismissive way this adoption story was described to her? How would hearing about the original mother “giving up” her child affect my daughter’s feelings about her own birth mother and herself? Now and in the future?

I tried to stick around to watch the adorable gorilla tumble and play a little longer, only to be driven away by the zookeeper’s constant explanation of the gorilla’s family dynamics to each new observer. Feeling defeated, I left the exhibit.

Now I am fully aware that animal group relationships are not the same as those of humans. However, we cannot deny that language is powerful. The adoption world has spent decades encouraging adoptee-centered language, even down to the way we abbreviate words, with the purpose of strengthening relationships, empowering all in the adoption triad, and supporting positive views of the adoption experience.

Adoption carries a lot of baggage and careless words are a heavy burden to add on. The world is well aware of all the brokenness at its foundation, which highlights the importance of building an affirmative understanding of the love at its core by being intentional with our words. Being conscious of adoption positive language for public consumption can do nothing but support the adoption triad. As an interactive piece of our culture and society, museums and zoos have a responsibility to their patrons to portray appropriate terminology.

At this point you are probably wondering what positive changes can be made to your vocabulary. Intentional change can reach as far as the entire view of adoption in our culture and as near as the tender heart of an adoptee. Here are 4 tips for explaining a situation like the one I encountered at the zoo.

1. Adoption is an event, not an identity.

A child does not always need to be described as “adopted.” It does not define the entirety of their lives. We do not define other children by how they arrived in their own family. It would be ridiculous to introduce a friend’s child as born via C-section or conceived on a holiday. It is equally inappropriate to refer to someone as an “adopted child.” If it is necessary to explain, some adoptees prefer “(s)he was adopted” to “(s)he is adopted.” That subtle difference changes adoption from being a description of the person to an event that happened in that person’s life.

As an adoptive mother, I feel pretty darn real as I’m changing diapers, cleaning messes, and helping with homework. Likewise, every moment of morning sickness, labor, and love felt incredibly real to my daughter’s other mother, too.

3. Birth parents don’t give up.

Children are “placed for adoption.” It is best to avoid words insinuating that what their birth parents chose was anything but strong, courageous, full of love, and intentional. Adoption is a choice made from wanting, not from unwanting.

Infertility is a common factor leading to adoption. However, it is not the only factor. It is never appropriate to use language suggesting that parents could not “have children of their own.” A child added to a family through birth or adoption is equally important and loved by that family. Adoption is never inferior to giving birth. No child is a consolation prize.

Adoption is a lifetime of complexity. Love and kindness can simplify every moment of it. Let’s take the time to exercise intentional kindness in a world that so desperately needs it by utilizing language that builds up members of the adoption triad in the minds of our communities and in their own hearts.

Lauren C recently completed graduated school while navigating military life and parenting three children, by both biology and adoption.  A volunteer with The Carrying on Project, she leverages her status as a military spouse to help build community around military bases and support military families with young children.

I’m all for accurate and respectful adoption language. Positive, even, as Lauren says.

However I also acknowledge that a person can go SO FAR POSITIVE so as to become disconnected from the wholeness, from the textured essence of a complex issue. Such as this treatise on how positive adoption is for everyone all the time.

Also, I observe that at least a portion of what “positive” means comes from where a person stands in the adoption constellation. This is what makes adoption such a thorny issue to talk about among ourselves.

What should this zoo know about “real” parents, especially when children affected by adoption are within earshot?

8 thoughts on “Adoption Language at the Gorilla Exhibit”