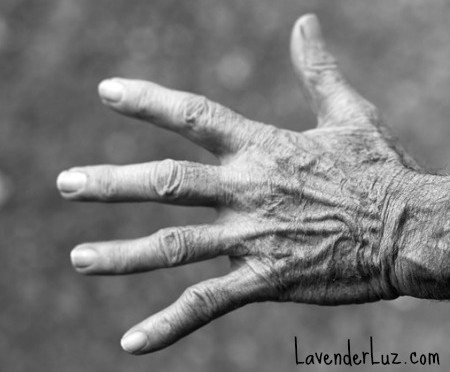 I wept the other day. My tears weren’t tears of joy, nor tears of sadness, nor even of frustration. They were tears of connection.

Tessa and I were in an urban area, headed home during rush hour. Stopped in traffic, I pointed out an elderly lady ambling on the sidewalk, noting how she reminded me of the grandmother who had lived with one of our friends. The woman struck me, at quick glance, as disoriented, which was part of the resemblance. Last year, our friend’s grandmother died with Alzheimer’s disease.

As the light changed and we began to move, we witnessed the woman trip and fall to the ground. It was horrible and shocking to see — her face broke her fall. I moved into the left lane so I could turn and park, calling 911 while doing so. Tessa ran from our car to help the lady.

Another passerby was already there, a young man who had helped the woman to lean against him. Her hand was bleeding profusely, sliced along the side of her palm. Another woman ran up and offered her sweater as a tourniquet.

In the meantime, the 911 operator asked me to stay on the line until paramedics arrived. Was the woman conscious? Yes, but she wasn’t talking much. When I asked where she hurt, she mumbled that her hand needed to be fixed up, yet she refused the proffered sweater.

Quite a bump was appearing on her cheekbone, red and angry. I noticed another older bruise on her forehead.

Over the next eight minutes, perhaps a half-dozen more people came to offer help. Each of them was concerned, caring, connected to her and thus to the other helpers.

The fire truck soon arrived and two firemen took over. I’ve thought of that lady often since that afternoon, and I hope she is well and with her people to care for her.

When there is so much unkindness in the world that we start to expect unkindness from each other, it was overwhelming to witness all this goodness. Sheer goodness, sheer human kindness. As Tessa and I returned to our car, I began to shake not only from the adrenaline letdown and the chilly wind, but also from the experience of witnessing all that goodness.

We passersby dispersed to our lives. Perhaps like me, they were touched by our accidental connection, too.