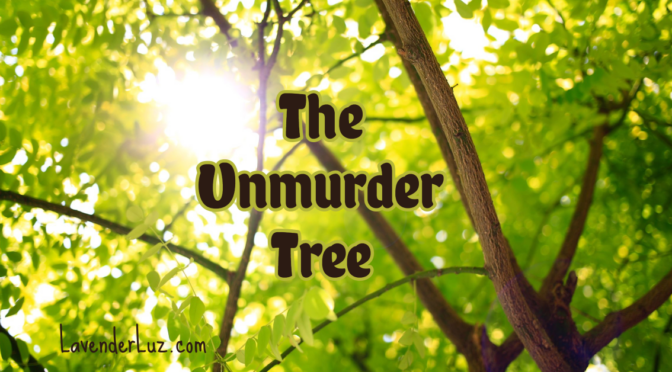 There is no longer such a thing as a quick trip to the library. Whenever she picks up her new book or drops off her old one, she always takes the opportunity to sit in the town square and gaze on the tree. The previously nothing-special tree.

It’s a typical town square tree: a not-too-big trunk you can wrap your hands around, a canopy you can walk under without ducking, its leaves providing a small radius of shade during the hot parts of the year. The tree emerges directly out of a grate plopped into the pavement. Along with a few identical siblings in the square, this tree has borne witness to frolicking children of summer and cheerful holiday carolers in winter, plus various festivals throughout the year.

This tree is the marking place where Officer Ben Gladley fell on that dreadful day, the first day of summer, a time that should have been all about fullness and promise.

She first noticed this particular tree the day after the murder. She felt an inexplicable hunger to be near Officer Gladley, his essence; it could not be denied. That first time, the tree was wrapped in yellow crime-scene tape and the pavement was marked in orange — indicating shell casings, according to a man who said he used to be in law enforcement and who also had the hunger.

Soon the yellow and the orange were gone and the tree once again became just a tree, not anything special to anyone who didn’t know, who didn’t pay attention. She would always make her short, secret pilgrimage to the tree while on her book errands, feeling guilty about her right to have feelings for this man.

On this day the tree is no longer summer-green, but autumn-gold, its leaves not yet dropped by frost or time.

She parks in the city lot and walks through the alley, navigating the timeline and placeline she’d seen from the video surveillance footage released by officials a few days after the murder.

She pauses when she gets to the tree, as she always does, to try to catch a trace of her beloved Officer Gladley. They hadn’t had a close relationship, so “beloved” is possibly too strong a word, but he was important to her. He got her child through a particularly difficult school year with his special brand of sternness and playfulness, and she would forever be grateful to him. She liked him, too. He was always smiling, always kind when she saw him out in the community, always eager to help. He’d even gotten awards for it.

She continues past the tree to a table in the square and sits, shielded from the low-hanging, bright November sun by a cheery yellow sunshade in the shape of flower petals. She lays her to-be-returned books on the table. She sits.

She is relaxed but alert, observant. She looks up and sees the scene from a different vantage point than the surveillance camera’s. She spies that camera against a building, the one that recorded the events of that horrible day.

She sits, the sunlight intoxicating, stolen moments of a summer long past. She inhales deeply, observing her breath and closing her eyes. A local restaurant is frying up chicken. She exhales equally deeply, relaxing into sensation. A skateboard scrapes somewhere behind her right shoulder; a motorcycle revs somewhere behind her left. 80s music comes from the same direction as the frying chicken: If You Leave by OMD (Don’t Leave Now). Passers-by, in groups or on phones or both, drop fragments of conversations that perish before they hit the ground. A nearby church bell chimes four notes of a hymn to mark a quarter-hour. The moment is exquisitely beautiful, and her heart can barely contain its gratitude for being alive and occupying space in it.

She has found the sweet in-between place. The liminal space that spans the now and the eternal and joins her with All. The arbitrary membranes that contain space and time exhale with her exhales. She’s arrived at one of those rare and fleeting moments in which the linear nature of time and space and the separation that comes from them don’t exist. Only here, only now, only All.

She sees him. Officer Gladley is approaching her from the alley, walking with a purpose. She gets so excited to tell him all the words she’s been depositing at the tree. What should she say with this fleeting opportunity? Which words are most important? She and Officer Gladley both walk toward the tree as she plans how to convey all that needs to be conveyed. She lands on this: My gosh, Officer Gladley! I have missed you so! You are a good man, a wonderful human. Thank you for all you’ve done.

He sees her, a spark of recognition and an imminent Hi! as they’ve struck up conversations before. But she sees the shadowy man in the background come out of his truck to approach Office Gladley.

All of a sudden, it seems wrong. Wrong wrong wrong. She sees what’s coming just as clearly as she saw the video footage. This time she will also be in the line of fire.

Her thoughts, still in the liminal space, rearrange. She has no idea what she’s doing, what she’ll do. She tunes in. She submits to a guiding force. She knows what she is about to do makes absolutely no sense.

Bypassing Officer Gladley, her hand goes up in a stop motion and she tells him, “Can’t talk to you right now!” She keeps moving toward the shadowy man.

What the hell am I doing? She second-guesses herself. I see his guns. I know what’s coming. WTF am I doing?

When within earshot of the shadowy man, she calls his name, gleaned from news accounts and preceded by the honorific “mister.” She sees the almost-gone look in his eyes, yet still she approaches. She can do this. Her resolve has returned.

He looks at her. She has one shot to make a difference.

She has his attention. He is bewildered. This wasn’t in his plan. He cocks his head like a dog hearing a curious word.

8 thoughts on “The Unmurder Tree”